It is with great sadness that we have to report that William Lack passed away on the 30th May 2019, aged 74. 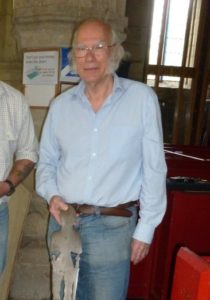 William was born on 13th April 1945. He took a degree in mathematics and pursued a career as a geologist. He eventually met H.K.Cameron, the renowned monumental brass conservator, via his wife Jenny who was a member of the Monumental Brass Society who had arranged a brass rubbing exhibition in Shrewsbury to raise funds for the Cambridge workshop. Keith Cameron, in his 70s at the time, was looking for the right person to become his apprentice and William soon transpired to be that person. Before long monumental brass conservation had taken over as the day job, and remained William’s career for the rest of his life. This was, of course, tempered with other interests, as William was a real family man – juggling work with bringing up his two daughters whilst Jenny was working as a teacher. He also had an enduring love of old cars and motorsport.

William Lack succeeded Les Smith as Hon. Bulletin Editor for the Monumental Brass Society with Bulletin 113 (January 2010) the first to appear under his editorship. He has been responsible for a total of twenty-nine issues during which period many significant advances and improvements had been implemented at his instigation. He has also prepared thirty-two reports on conservation for the Society’s Transactions.

William has been responsible for conserving more than 1,000 monumental brasses to the highest of standards. It is of great credit to him that he sought out an apprentice of his own as he saw his retirement looming – although he actually never stopped working! From 2014 he started working closely with Simon Nadin at Skillingtons, and with Simon formed a new company, Skillington Lack, under the Skillington Workshop umbrella. This company continues to thrive with Simon continuing where William left off, in a new studio set up with William’s guidance.

An enduring contribution of William’s study of monumental brasses is his co-authorship of the County Series that commenced in 1992 with seventeen volumes published to date. This, for the counties covered, forms the definitive catalogue of known brasses including those which have been lost or survive only as indents.

William passed away after a relatively short illness, leaving Jenny, his daughters Jo and Lucy, and his four grandchildren.